Spotlight on Chicago: A Q&A with Mary Zimmerman

When Mary Zimmerman came to Chicago she was 18 years old with a suitcase. She came with a love of theater, storytelling and literature.

Now Zimmerman is a renowned writer, director, librettist and adaptor who takes works one might not ever picture on the stage and transforms them into theatrical masterpieces. She’s got dozens of Jeff Awards, a Tony, a MacArthur Genius grant and many other awards under her belt. Between her time as a professor at Northwestern and creating theater, Zimmerman is always on the move.

The one move she doesn’t anticipate is leaving her Midwestern roots behind. Chicagoland is her home and the community in the Windy City is one she cherishes.

“I've never moved because I'm not ambitious in that way,” Zimmerman said on an unusually warm December afternoon. “...I have school and Lookingglass which is my social and family producers and then I have the Goodman which has such grand capabilities which is also family to me. I have these three things and that's sort of irreplaceable for me.” 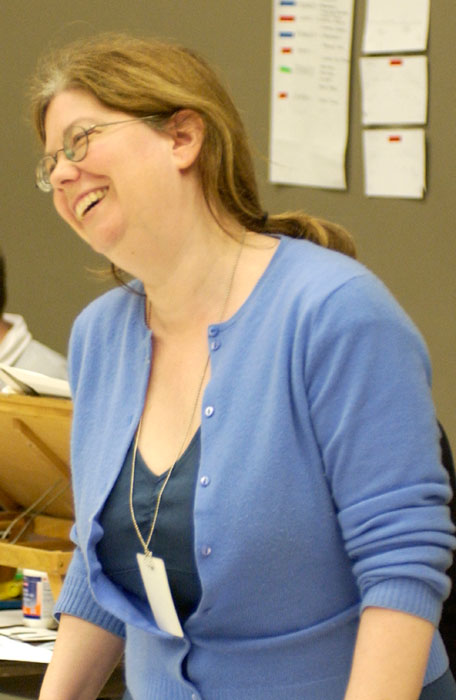 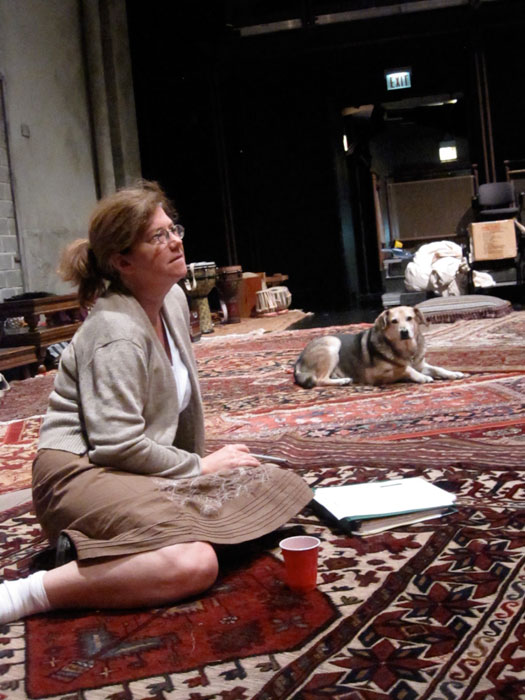 How do you negotiate all the different facets of your life? Being a professor in conjunction with being a director?

I'm sure that you could find many students who say I don't. [Laughing]

One thing that's been very helpful to me is that Northwestern is on the quarter system, and it's much easier. That has benefited me hugely. Early on I was doing everything all the time, but Northwestern is super generous to me and I only teach in the classroom two classes a year, which is still something, but then I usually have students with me on projects for almost anything I do in Chicago.

I think it's interesting that you went from hesitation as a young adult to studying theatre to being a mainstay name in Chicago's theater scene.

Well, when you're young, you go to plays and the only part of it you see is on stage. So you think you want to be an actress and that's what I thought. I didn't go [to undergrad] as a director, I didn't realize I was director until late into graduate school.

I think nowadays people are more aware of the role of the director somehow it just feels like it's more in the culture. It's also true with the idea of a role model...there really weren't [visible] female directors [when I was at that age.] That's kind of an ignorant thing to say because there have always been some very prominent regional theater people women, but I didn't really see them. [That said] there was no part of me that went “oh gee I wish I could be a director, but I'm a girl so I can't.” ...Now I feel like students come in as freshmen and want to be directors. They're so aware of it. It was a different world before the internet.

When it comes to something like Steadfast Tin Soldier, where you are both the director and adaptor, how does something like that come about for you? When you take something from literature and transform it almost magically to play on the stage?

I was just such a compulsive reader as a child, I still am, and I just wanted to inhabit those works. I have a great reverence for these works of world literature or oral [storytelling.]

I did sort of look for a Christmas story that isn't done, and to tell the truth, Steadfast as written isn't necessarily a Christmas story at all. The little boy is playing with his tin soldier and, maybe he got it as a present for Christmas, but all you have to do is make the soldier a Christmas present and there you are. I really love that little story which is only like 100 words, but I noticed that because that is exactly what one notices when thinking about adapting for the stage, there's virtually zero spoken language in it.

When you're looking to adapt something one of the things you’re looking for is how much in the dramatic mode it is. How much of it is it in dialogue or is it not at all? … What you're addressing when you're adapting work of literature and oral storytelling is how the story communicates itself. And if it has to all be done through people talking, [adapting] is going to be weeks long with big epic narration. But I didn't want [Steadfast] narrated. It is too small a narrative and narration would overburden it. I just challenged myself to see if it could be communicated entirely visually. That felt immediately right.

The parts of my shows that I never tire of are always some moment where I decided not to use language. It goes silent, there's music or a beautiful transition. With musicals you have the numbers, you know the musical interludes and our minds get to rest a little bit because it's not colonized by all of this language. The language being spoken becomes the language in our head. And, even if it's our native language, there's still a process of listening and understanding and there's still a bit of processing going on.

[Adaptation] can become deeply personal in a way and I feel like it echoes or recalls when we're children when we're pre-verbal. [It is when] our life is dependent on trying to observe and figure out what's going on. It takes us to a proper place to understand the way children love animals because they're similarly subject to grown-ups and don't understand the world or language of those grown-ups. So, I knew I wanted [Steadfast] to be like a visual feast even before I knew it should be silent.

The making of it was so joyful because the way I normally work is I start with no script. I have to write some scenes for auditions but known for [having] no script on the first day. I write it in between rehearsals a day ahead. There's this intense pressure every night [whereas] here I had the pressure of figuring it out, but there were no words to be written. It had all the advantages of that way of working and none of the distressing disadvantages.

Because [Steadfast] is your brainchild, how did you react to the idea that this show will live on for future holiday seasons perhaps in perpetuity?

I don't know if it'll be every year, but I think you're right. It will happen a lot. I was hopeful that it could be something like that. Alice in Wonderland has been our “Christmas Carol” for a while in the summers.

But I'm thrilled, you know? Honestly, three days into rehearsal, I had such excitement and I was like, “this is the best thing I've ever done.” I feel that way about almost everything I work on, but with this one, I had such fun. You kind of need to fall in love with what you're doing, but there was something so pleasing about [Steadfast]. It wants to take you somewhere but it also has a little thread of seriousness in it.

In the end, I am really happy with it. I feel it's very much the result of my collaborators in the cast and the musicians, and everyone who worked on it who made it what it is.

I've got a very strong affection for Lookingglass and the Goodman and all of Chicago theater, but I've always felt that Lookingglass is underrecognized for the fact that 95% of what we do is world premiere and company generated. That's phenomenally difficult. 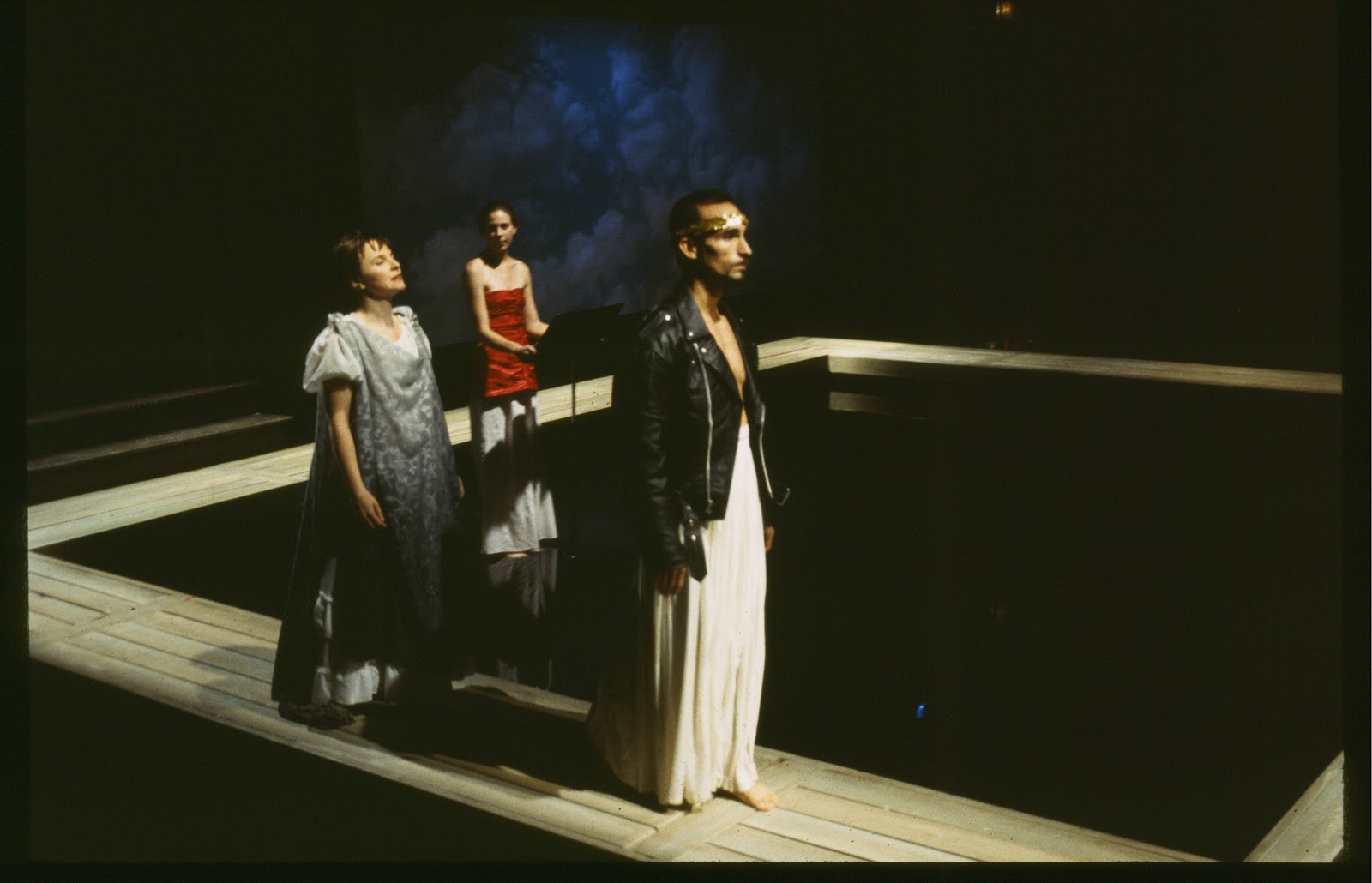 So when you take something like The Music Man, which is obviously such a different beast than Steadfast in terms of scope and storytelling, how do you take it and you make it feel like a new work? You took this piece that I know every word to and you made it feel like the very first time I'd ever seen it.

I'm just responding to it the way I respond to it. I certainly don't want to copy something someone else did. You know I'm Midwestern myself, I'm extraordinarily Midwestern. I guess the one thing that I did consciously know I was going to do differently is show that the people in River City are in their own big, cosmopolitan world. If you're from the Midwest you know it's the plains, the town, and then the plains again or, even if it's a huge city, it's the plains, then the city and then the plains again.  Where I grew there was a dirt road within half a mile in two directions though that's not true anymore. I know how suddenly those towns drop into the natural world. That was my key into it was the Midwestern horizon line.

I did make that one move, instead of having a footbridge, we made it the water tower. I really thought, because musical people are purists sometimes, people would be like “it's a footbridge not a water tower,” but the water tower is so iconic in our [small] towns and also very much a place where you would meet someone to makeout.

I had a great time [with Music Man.]. I'm really happy I did it because it is a masterpiece of the genre and I wanted to learn something about storytelling, structure, character, how to entertain [and] how to hold an audience.